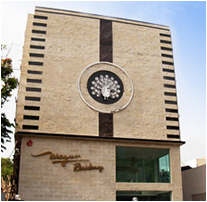 Our hotel has Wifi Internet Service.

The 24 hour multi-cuisine vegetarian restaurant that boasts a 'à la carte' for breakfast, lunch and dinner in the whole of Kolkata ( 51 covers ). Authentic Indian, Chinese, Continental cuisine. Unique and delightful food festivals are showcased regularly at the restaurant.

At the southern end of the Calcutta Maidan is the imposing white marble Victoria Memorial, built by the British in 1921, modelled on the Taj Mahal. It is a treasure trove of Raj Relics, offers tree-lined walks in splendid parks, 'lakes' and houses a number of statues and busts of eminent people including that of Queen Victoria. The exhibits include paintings, manuscripts, firearms, statues, lithographs and furniture.

Sprawling over several acres of land on the western banks of the river Hooghly (Ganga), it is a place of pilgrimage for people from all over the world, professing different religious faiths. Even people not interested in religion come here for the peace it exudes. Sanctified by Swami Vivekananda, and several other illumined monks, the Belur Math premises include the main monastery, several temples and the Headquarters of the twin organizations of Ramakrishna Math and Ramakrishna Mission. The Ramakrishna Order stands as a symbol of the eternal truths of religion tested and embodied by Sri Ramakrishna and Swami Vivekananda and their message of harmony of religions, divinity of the soul, renunciation and service.

Dakshineswar Temple Built by Rani Rasmani of north Calcuttain the 19th century on the bank of Ganges,north east of Calcutta.It is here that Sri Sri Ramakrishna Paramahamsadeva,the renowned spiritual personality and the guruof Swami Lord Vivekananda,had worshipped Kali, the Divine Mother,and did his sadhana at the Panchavati Garden adjacent to the temple.A world famous place of pilgrimage.

It was earlier known as the 'Octarloni Monument' or in short 'monument'.This was erected in 1828 to commemorate the victory of British army under David Octarloni over the Nepal army in 1814. Charles Nolis had made the blueprint of this monument. Its builder was J.P. Parker. A fund was collected to erect this monument. Its cost was Rs. 35,000 in those days. One can have a panoramic view of Calcutta from the top of Shahid Minar. From there, the much-known Calcutta is transformed into an enigmatic fantasy land.

Popularly known as the Rabindra Setu, Howrah Bridge is an engineering marvel and is counted amongst the busiest cantilever bridge in the World.Observing a daily traffic of about 60,000 vehicles and innumerable pedestrians, Howrah bridge have equalled its position to Sydney Harbor Bridge. But the later can never dream of such a traffic. The bridge connects Kolkata and Howrah and is the lifeline of the city. The best way to enjoy its stately beauty is to view it from the middle of the river.

One of the oldest museums in Asia, the Indian Museum was founded in 1814. You'll need an entire day, or more, to fully enjoy the fossils, coins, stones, Gandhara art, meteors and much more that go to make up this museum. Don't miss the 4,000-year-old mummy here, whatever else you do! Also on display is an urn said to contain the Buddha's ashes. Just ask anybody on the road for the way to the "Jadughar" (literally, house of magic).

The Marble Palace, located at 46,Muktaram Babu Street, Kolkata 700007, is a palatial mansion located in North Kolkatawhich was built by Raja Rajendra Mullick in 1835 and contains several Western sculptures, pieces of Victorian furniture, paintings by European and Indian artists and other objets d'art. Large chandeliers, clocks, and busts of kings and queens decorate the hallways of the palace. The mansion is famous for its marble walls and floors, antiques, paintings by Rubens, curios, marble statues, floor to ceiling mirrors and for its collection of rare birds. Marble Palace is still a working residence and entrance is restricted. Permission must be obtained from the government tourist office.

Located on the Eastern Metropolitan Bypass, this is newest addition to Kolkata's long list of tourist attractions. This architectural showpiece has more than just its external grandeur. A showcase of scientific applications, this is the first and the only institution of its kind in India. The different sections of the complex include the Space odyssey, Dynamotion, Life Science Corners, Science Park, Toy Train & Ropeway , the Dinosaurs Complex and others.

At Mayur Residency, we welcome your queries, comments and suggestions to help us ensure that we continue to provide you with a class service.