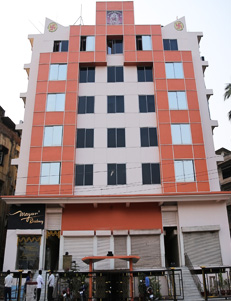 Car,Bus, Air,Rail and Tour Packages is available at the travel counter.

The hotel has car parking facility. In the premises of the hotel we have the facility to park over 20 cars.

The 24 hour multi-cuisine vegetarian restaurant that boasts a 'à la carte' for breakfast, lunch and dinner in the whole of Guwahati ( 125 covers ). Authentic Indian, Chinese, Continental cuisine. Unique and delightful food festivals are showcased regularly at the restaurant. Well stocked Bar which serves from 11 A.M to 10 P.M.

One of the best known seats of Tantric Cult, the Kamakhya Temple is also one of the most venerated Shakti Peethas associated with Sati , an incarnation of Parvati and the wife of Shiva. According to the legend, the temple is built on the very spot where the reproductive organ of the Goddess Sati fell when her corpse being carried by Lord Shiva was cut to pieces by Lord Vishnu. Lord Vishnu apparently did it to stop the tandav (dance of destruction) of Lord Shiva who was angry following the death of his wife, Sati, who had committed suicide when her father abused Shiva and didn't invite him to the universal Yajna...

Basistha is the another tourist spot in Guwahati located in Beltola area in the city. Basistha Ashram is considered to be the hermitage of the legendary sage Basistha. It is located in . The Ahom king Rajeswar Singha (1751-1769) constructed this temple. Natural and scenic beauty of the Basistha river is the another tourist attraction in the temple.

The temple of Umananda is located on the Pea cock Island (as named by some poetic British Administrator) in the middle of the river Brahmaputra at Guwahati. Country boats that are available at this place take the visitors to the island. The mountain on which the temple has been built is known as Bhasmacala. The temple has inherited some rock-cut figures, which speak passionately of the masterly skill of the Assamese craftsmen. The sculptures here show that the worshippers there followed all the principal Hindu gods. We find representations of Surya, Ganesha, Shiva and Devi (with a scorpion as emblem) in addition to those of Visnu and his ten incarnations (avatar).

Brahmaputra Cruises: Wildlife and wilderness are the main features of a cruise in Assam on the vast Brahmaputra river the river bed is often 20 or 30 km across,an empty world of sand spits and water with marvellous bird life and the occasional Gangetic Dolphin. The cruises here also give access to a number of India’s National Parks, including Kaziranga, perhaps the finest of all, and Manas, a Project Tiger reserve on the Bhutan border.

At Mayur Residency, we welcome your queries, comments and suggestions to help us ensure that we continue to provide you with a class service.