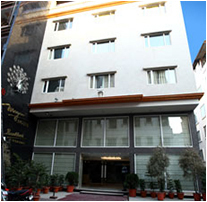 The 24 hour multi-cuisine vegetarian restaurant that boasts a 'à la carte' for breakfast, lunch and dinner in the whole of Delhi ( 151 covers ). Authentic Indian, Chinese, Continental cuisine. Unique and delightful food festivals are showcased regularly at the restaurant.

India Gate is constructed as a memorial and was built in the memory of 90,00 soldiers who laid down their lives during world war. Located at Rajpath, India Gate is 42 m high and is popular relaxation area during the summer evenings. India Gate also act as popular pinic spot during winter. Also known as the All India War Memorial, India Gate was designed and constructed by Lutyens. He was the who is considered the chief proclaimer in designing the New Delhi plans.

Originally known as Qila-e-Mualla, Red fort or Lal Qila was built by the Mughal Emperor Shah Jahan after he transferred his capital to his newly planned city of Shahjahanabad (Delhi) from Agra in 1638. The foundation stone of this massive citadel was laid in 1639 and it was completed after nine years in 1648. Designed by the Mughal architects Ustad Hamid and Ahmad, Red Fort is an important symbolic monument in India even today. Every year on Independence Day (15th August) the Prime Minister of India hoists the national flag and addresses the nation, from the ramparts of Red fort.

The world famous towering Qutab Minar, started in 1192 by Qutab-ud-din Aibak (1192-98). breathes down the neck of the Quwwat-ul-Islam mosque. There is a slight difference of opinion as to its purpose: it probably was a tower of victory, but then again it could have been built to be a minar (tower), attached to the Quwwat-ul-Islam mosque, for the muezzin (priest) to climb up top for a prayer. Nearest Railway Station: Nizamuddin Railway Station Nearest Metro Station: Kendriya Terminal Functional Metro Station: Kendriya Terminal Nearest International Airport: Indira Gandhi International Airport Time required for sightseeing: Approximately 1 hour

Here are some facts about the Rajghat which would help you to have a quick glance of this famous memorial in Delhi. Also, this will make it a lot more convenient for you. The mortal remains of Mahatma Gandhi were cremated on this spot on the west bank of the river Yamuna on the evening of January 31, 1948. A simple open platform inscribed with the Mahatma's last words, 'Hey Ram' (Oh God) is set in a garden with fountains and a variety of exotic trees. A prayer service is arranged for on every Friday, the day he was assassinated, at 5.30 pm in the evening. This memorial is located between the main Ring Road which is now known as the Mahatma Gandhi Road and the banks of the Yamuna River, just southeast of Red Fort.

Jantar Mantar is an astronomical observatory with mason ary instruments, the mathematician and astronomer king. The Samrat and Yantra supreme instrument, the largest structure shaped like a right-angled triangle, is actually a huge sun-dial; the other five instruments are intended to show the movements of the sun, moon etc.Delhi's Jantar Mantar is the first of the five observatories that he built with large mason ary instruments. The observatory has the Samrat Yantra, a simple equal hour sun dial, the Ram yantra for reading altitudinal angles; Jai Prakash for ascertaining the position of the sun and other celestial bodies, and the Misra Yantra which is a combination of four scientific gadgets.

Swaminarayan Akshardham Mandir in New Delhi epitomises 10,000 years of Indian culture in all its breathtaking grandeur, beauty, wisdom and bliss. It brilliantly showcases the essence of India’s ancient architecture, traditions and timeless spiritual messages. The Akshardham experience is an enlightening journey through India’s glorious art, values and contributions for the progress, happiness and harmony of mankind. The grand, ancient-styled Swaminarayan Akshardham complex was built in only five years through the blessings of HDH Pramukh Swami Maharaj of the Bochasanwasi Shri Akshar Purushottam Swaminarayan Sanstha (BAPS) and the colossal devotional efforts of 11,000 artisans and BAPS volunteers. The complex was inaugurated on 6 November, 2005.

No electronic items are allowed in the complex - No mobile phone, No cameras.

Please note that Swaminarayan Akshardham is closed on Mondays.

Bahai Temple or Lotus Tample is made up of pure white marble The architect Furiburz Sabha chose the lotus as the symbol common to Hinduism, Buddhism, Jainism and Islam. Adherents of any faith are free to visit the temple and pray or meditate. Around the blooming petals there are nine pools of water, which light up, in natural light. It looks spectacular at dusk when it is flood lit.

At Mayur Hotel, we welcome your queries, comments and suggestions to help us ensure that we continue to provide you with a class service.